The draft EA for the Labyrinth Rims / Gemini Bridges travel plan in Moab has just been published, kicking off a 30-day comment period that ends October 7.

This is probably the most important travel management plan of the decade and will decide the fate of most of Moab's most famous Jeep trails.

It is crucial that you comment opposing alternatives B and C and supporting alternatives D or A, and ask the BLM to keep all of the routes mentioned below open instead of closing them. Please review the entire press release above for additional information.

COMMENTS ARE ONLY ACCEPTED UNTIL OCTOBER 7, 2022.

If this extreme alternative was chosen (unlikely but possible) it would utterly eviscerate the Easter Jeep Safari trail network and close at least portions of most of the famous named trails featured in guidebooks and motorized events.

The so-called "balanced" or "multiple-use" alternative C (the one the BLM almost certainly intends to adopt) appears unchanged since the preliminary alternatives release a year ago, and would close 2/3 of Ten Mile Canyon, half of Hell Roaring Canyon, all of Mineral Canyon, one of the overlooks on Deadman Point, part of the Buttes and Towers safari trail, the 7-Up trail, and many other lesser known routes.

Alternative D is the "pro-motorized" and has the least amount of closures, but still closes part of the Buttes and Towers safari trail. It could be acceptable to motorized users if they eliminated that closure. Alternative A, the no-action alternative, is of course the best but the BLM never picks that one and always picks one of the action alternatives. So D is the only real option for motorized users to support.

In preparation for upcoming events, you will need to create a profile on the website, and and add a vehicle to  your profile before you will be able to register for an event & trails.  PLEASE keep your license number and vehicle descriptions as well as your personal information up to date as time passes. This allows us to send you updates and information as it becomes available.

You can PreRegister your profile and vehicle here, however this DOES NOT register you for an event. To register for an event, make note of the opening date on the HOME page and register through the Events tab.

Thanks to all of those who participated in the Green River Melon Days parade. There were 12 jeeps and everyone had a good time and plan on participating again next year!

Questions - please check the FAQ's, your question may already be answered.  E-mail us using the CONTACT tab.  Or call 435-259-ROCK.

The Red Rock 4-Wheelers work to reserve a little strength to keep our recreational trails open. To that end, we have been setting aside some funds for emergency use. We call it the Multiple Use Defense (MUD) Fund.

When trail access or other multiple uses of the public lands are threatened, it is safe to say that the most important defense need is someone’s time and effort. It takes dedicated personal effort just to plan how to spend available money. The most serious threats are likely to call for professional services, probably legal counsel and actions.

The Red Rock 4-Wheelers are committed to defend and repair the Jeep Safari trails for all of our loyal supporters to enjoy, but we need your help. Read more and support the MUD Fund here.

The 2022/2023 Club Officers, Directors and Coordinators are:

Contribute at the $500 level, get an exclusive jacket and plaque!! Get the details here:

Check out the new RR4W Logo items in our store (Shop tab)!  We chose items that might come in handy when you're out 4 wheeling, at the ball park or in front of the TV on game day.  Coffee mugs, blankets, hoodies, travel mugs, and from the past - dash plaques, MUD pins etc. 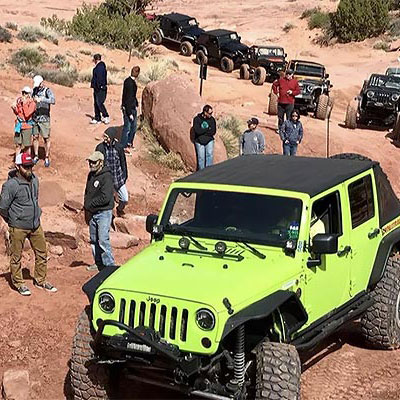 Trail of the Month

The Red Rock 4 Wheelers have a regular club run, usually scheduled for the 3rd Saturday of the month.


Click here for more details about the Trail of the Month

Be advised: the state of Utah has tightened up enforcement of non-licensed vehicles on public roadways, you may be pulled over and warned or ticketed.

The Easter Jeep Safari was Started in 1967 by the Moab Chamber of Commerce.  The very 1st trail was "Behind the Rocks Trail" (according to what has been told to the club President, the road was made or improved with a BLM employee and equipment.)  The "Moab Rim" was then added the next year.  In those days, individual ice cream packages were dropped by airplane to the trails at lunch.  All the leaders were Chamber members, there was no charge or entry fee, and only a Saturday trail.  To register you showed up Saturday morning and signed up for the trail you wanted.  The Safari was run this way through 1982 at which point the BLM required a permit and insurance.  The chamber was no longer able to run the safari and approached the club to run this event.

The Jeep Safari itself, and participation in the event has grown since the club officially formed in the early 80s. Once the event was coordinated by the Red Rock 4-Wheelers, the registration moved from the Chamber building north of town, to Lion's Park, and on to what was called "the Barn" which is where Dewey's is currently located near Center and Main. Over the years the increase in participation grew to expand the trail riding to more days until it finally reached a nine day event. "Big Saturday" still remains the culmination of the event on the Saturday of Easter weekend. With the increase in numbers, the registration was moved to the Spanish Trail Arena where it is located today several miles south of the city of Moab on highway 191. This also became the location for the gigantic raffle, and the major vendor exposition.

Red Rock 4-Wheelers: A few years prior to 1983 the club had been formed as a small local organization by George Schultz. Most of the meetings were held in members homes. In the early months of 1983 after agreeing to take over the Easter Jeep Safari members (Leaders) were being recruited to run the Safari. And that transformed the club to what it is today. We have gone through many changes and added many new members, but we haven't forgotten that the club was formed as a family club to have fun and promote responsible 4-wheeling. So now, instead of just Jeep Safari, we have the Labor Day Camp Out, trails of the month, we cleanup and mark the trails, and participate in other club outings. We also work to keep the roads that we have open.