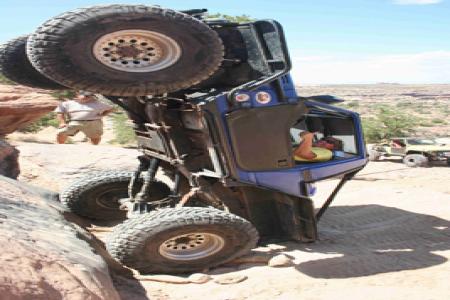 A major trail goal is Arth's Rim, which overlooks Highway 191 about 1300 feet below. The route first angles up the sloping part of the cliff to a gap in the rim rock. It follows Little Canyon partway into the mesa to resume the climb along the more gentle slope of the tilting rock strata. Much of the trail is routine four-wheeling, but the approach to the rim through Mirror Gulch is difficult and threatens sheet metal. Later in the trip Widowmaker Hill has become so extreme your leader will take a roundabout bypass to the top. Approximate mileages: 66 total, 46 off pavement.

The road portion on the slope beneath Arth's Rim climbs to increasingly fine views of Arches National Park, Moab Valley, and the La Sal Mountains. That is just a warm-up for the view from the perch at the top. Little Canyon has beautiful vertical walls, and a few arches may be spotted by alert riders. The Gooney Bird Rock is interesting to see; the route goes right under it.

This trail varies from easy dirt to some tall sandstone ledges, with some relatively level slickrock and sand mixed in.

The slickrock slopes leading the way to Arth's Rim have one step that may warm up some tires. Near the rim the trail passes "Rock Chucker", once the way to go but now used as a playground.  "Mirror Gulch" signals the start of the final .3 mile to the rim. There are a series of ledges, shelves, and a switchback in this short distance to challenge both driver and vehicle. The view from the rim is a highlight all by itself.