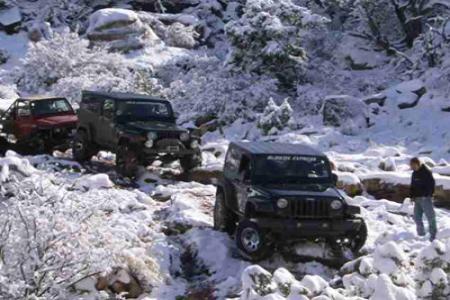 This trail enters an area that remains beautiful despite the marks of "range improvements", power lines, and uranium mining. Today, grazing continues, the power lines hum, but the mines are in ruins. Four-wheeling gets better, however, as the mine roads deteriorate. The trail is about 12 miles south of Moab and between Highway 191 and the La Sal Mountains. Much of it is in and about Pole Canyon and other headwaters of Kane Springs Canyon. One badly eroded trail portion crosses a tributary canyon that we are calling Strike Ravine for the outcrop of a tilted sandstone layer that forms the base of the trail.
The rocky hills and bouldery washbottoms make high ground clearance throughout the underside of the vehicle an important consideration. There are sneaky rocks that make it easy for vehicles to use their sheet metal panels as "paint brushes". Approximate mileages: 32 total, 11 off road.

In addition to the views inside the rugged canyons, there are beautiful vistas of colorful rocks, forested slopes, and the snow-covered La Sal Mountains.

The easy parts of the trail are sandy dirt with enough bedrock poking through to keep the speed down. The difficult creek-bottom parts have rocks, boulders, and ledges, and the most difficult hills have large, loose rocks.

Two hills have loose dirt and rocks that cause poor traction. The canyon bottoms have large rocks and rock ledges that can change with every flood. Strike Ravine is ledgy and rough, with a combination of rock steps and loose dirt. Tall tires, short wheelbase, and short overhangs are the order of the day.